Adaptation of a cat in a new home

When bringing a cat into the house, the owners usually understand-you need to give the pet time to get used to it. Adaptation to new conditions can take up to several months, if you do not take into account some important points. 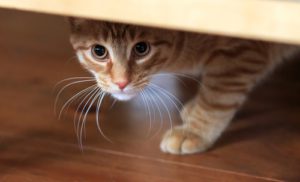 Adaptation is delayed if:

Do not prepare the apartment / room properly. The most common approach is to bring the animal home and hope that it will somehow sort itself out. And he understands — he finds the safest, most inaccessible shelter. For example, he will climb under the bed-sofa, under the bath and behind the kitchen set (top 3 favorite places for cats). And it doesn’t come out all day. Or goes out at night. In order not to think about how to pick out the cat from behind the kitchen set, it is important to put it in one room for the time of adaptation, so that all unnecessary holes are sealed there. And put everything you need there-a tray, bowls, a few shelter houses.

The second mistake is not to do anything if the cat is huddled in a hard-to-reach place. Under the bathroom, the cat can sit for months, getting out only at night or when the owners are not at home. The cat feels relatively safe, it is so comfortable to explore the space. However, in this state of affairs there is a serious drawback-sitting under the bathroom or in other remote corners of the apartment, the animal is practically deprived of the opportunity to observe people, to study them, which does not give any progress in the relationship. In some cases, this strengthens the animal in the idea that even without a person and communication with him, it is possible to live perfectly in this apartment (if the animal is not initially socialized). Yes, you can wait a month, and then start establishing a trusting relationship. But you can start working literally right away, without putting it off for later. And if for a domestic socialized cat this month of waiting may not be critical, then for a kitten or a wild cat from the street it can be a very valuable loss of time.

Try to contact as often as possible, but not obtrusively. People try to drive the animals to where they can’t escape, and pet them. Or pet them in their chosen hiding places. The first days of the cat is better not to notice. Initially, any movement in her direction (especially when she is cornered and deprived of the opportunity to escape), the cat will perceive as a threat. And either freeze or try to defend yourself. And the long-term goal is not to «fight» the cat by convincing her that she should love you. To let her initially understand that the person next to her is not an aggressor, is not trying to scare her or do something unpleasant (and even stroking, in which the animal is afraid, shrinks into a ball or tries to escape and run away-this is an unpleasant effect). The cat needs time to get used to it and understand that no one is trying to interact with it. Then she will much more quickly direct her attention to the study of the situation (realizing that she has nothing to fear from this person). And then, little by little, you can start interacting with her in a positive way.