The cat is bleeding — causes and first aid

The cat is bleeding — causes and first aid. The appearance of blood in a cat always scares owners, especially in pets living in an apartment, when there are no external reasons for bleeding, in general. It must be remembered that the blood of a cat happens with minor skin and mucous damage, for example, with abrasions, and may be a sign of a general disease or deep lesions of the skin. This article will help you understand at home how dangerous bleeding is in a pet.

The circulatory system in cats, like in other mammals, is of a closed type. In simple terms, blood flows in a circle, more precisely through vessels (hollow tubes) forming two circles of blood circulation. The movement of blood is provided by the heart (muscle pump, contraction of vessel walls, vein valves), while blood always moves in the same direction, arterial (rich in oxygen and nutrients) — from the heart to organs and tissues; venous (with carbon dioxide and metabolic products) — from organs and tissues to the heart. The question arises: how then does the body’s nutrition occur if the circulatory system is closed? 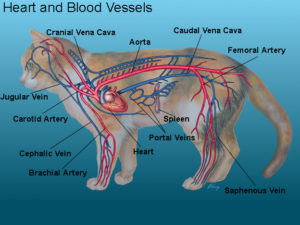 In tissues and organs, vessels branch into the smallest capillaries with the thinnest walls, the walls of all vessels have pores, as a result of this structure of the vascular system, gas exchange and transport of substances occur. The blood itself is a liquid medium, consists of blood cells and plasma, and due to a number of mechanisms in healthy animals, the blood in the vessels does not coagulate.

Any damage to the walls of blood vessels of a traumatic or inflammatory nature, as well as blood diseases, lead to bleeding in the animal. Depending on the type of damaged vessel, arterial (from arteries) and venous (from venous vessels) bleeding is distinguished.

Arterial bleeding is the most dangerous, since it is almost impossible to stop the blood on your own, surgical intervention is often required. Blood of scarlet color appears from arterial vessels, which pulsates, especially strongly from large arteries, arterial bleeding can last for a long time.

With venous bleeding, dark, cherry-colored blood appears, there is no pulsation, if small vessels are damaged, it can stop on its own. With severe venous bleeding from large vessels, the cat should be shown to a doctor.

Bleeding from capillaries, as a rule, is insignificant, is not dangerous to the life of the cat and stops quickly.

CAUSES OF BLEEDING IN CATS
Blood in a cat most often appears with skin damage. Various injuries, bite wounds, especially in free-range cats, lead to the development of external bleeding.

Blood discharge from the eyes

Blood discharge from the mouth

Spotting from the ears

Spotting on the skin and coat

Blood in the mammary glands of cats

Blood from the prepuce/penis in cats

Blood discharge from the genital loop in cats

Bloody discharge from the anus

More dangerous is internal bleeding — the outflow of blood from damaged capillaries and vessels of tissues and internal organs into the cavity (usually into the abdominal and thoracic) or into the lumen of hollow organs (stomach, bladder, and so on). The main causes of internal bleeding in cats:

SYMPTOMS OF INTERNAL BLEEDING IN A CAT
Due to the danger of internal bleeding, which, in the absence of timely help, can lead to the death of a cat, it is necessary to know a number of symptoms (signs): 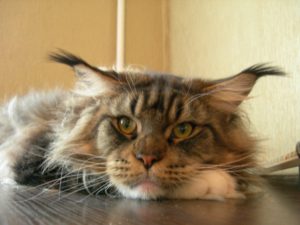 Obviously, according to one or more symptoms in a cat, it is not necessary to immediately diagnose internal bleeding. It is necessary to take into account the general condition of the cat, the presence of walking, possible injuries, chronic inflammation and then suspect bleeding. The final diagnosis of internal bleeding should be established by a veterinary specialist using additional diagnostic methods.

BLEEDING IN A PREGNANT CAT
Pregnant cats deserve special attention. Normally, discharge from the genital loop can be observed in cats during estrus and for 2-3 weeks after childbirth. The rest of the time, a healthy cat has no vaginal discharge.

In the uterus of a pregnant cat, future kittens mature, each fetus is in its own «children’s place», which provides nutrition to the fetus and protects against the introduction of infectious agents, toxins, and so on. At the same time, the cervix is closed during pregnancy, additional protection is provided by the mucous plug that forms in the cervix. Normally, spotting in a pregnant cat appears during childbirth.

Therefore, the blood of a pregnant cat is an unfavorable sign and indicates the pathology of pregnancy. Vaginal bleeding in a cat in the early stages of pregnancy may occur with the development of inflammation in the uterus, endometriosis, uterine bleeding, resorption or death of embryos, abortion.

Vaginal bleeding in a pregnant cat can be a life-threatening sign for fetuses and the mother. Even with minor blood secretions, it is necessary to immediately go with the animal to a doctor’s appointment.

BLEEDING FROM THE ORAL CAVITY
Blood from the mouth of a cat can greatly frighten the owners, but there may be several reasons for this.

Firstly, the change of milk teeth, which begins in kittens at the age of three months, may be accompanied by minor bleeding and usually goes unnoticed by the owners.

Secondly, in young active cats and cats, bleeding from the oral cavity may be associated with injuries to the mucous membrane of the gums, tongue, palate by foreign objects. Often domestic cats play with threads, synthetic ropes, ribbons from balls, which can be wound on the tongue and, with sudden movements of the animal, injure the mucous membrane and cause profuse bleeding.

Elderly cats and cats are prone to diseases of the teeth and gums. Paradontosis, tartar are accompanied by inflammation of the gums and tooth loss with the appearance of blood from the oral cavity.

Also, the appearance of blood from the mouth in cats can lead to: chronic autoimmune gingivitis (inflammation of the gums), ulcerative stomatitis, head injuries with splitting of the upper palate, fractures of the bones of the lower jaw, tumors in the oral cavity, the presence of foreign ones and other diseases.

OTHER SPOTTING IN CATS AND CATS
Even the appearance of a small amount of blood (a few drops) in the feces of a cat or cat can be a sign of bleeding. Copious outflow of blood from the anus is noted with injuries, erosive inflammations and tumors of the rectal wall, the presence of foreign bodies in the large intestine, cracks in the anus, with rectal prolapse. A few drops of blood in the stool indicates the presence of chronic inflammation of the mucosa of the large intestine, maybe with giardiasis, helminths, colitis and constipation.

Chronic gastroenterocolitis with bleeding has stages of exacerbation and remission. Proper feeding and the use of a veterinary diet for cats with digestive disorders will definitely support the work of the digestive system and prevent recurrence of inflammation and the appearance of blood in the feces of the pet.

Cats have a specific predisposition to the development of urolithiasis and kidney diseases. Blood in the urine of a cat can appear due to traumatization of the mucous membrane of the bladder and urethra with sand in urolithiasis, cystitis, injuries and tumors of the bladder, kidney inflammation, ureteral obstruction, vaginal tumors, when blood cells enter the urine during urination. If there is frequent urination with blood, the animal should be immediately shown to a doctor. Sometimes urine can acquire a dark color as a result of liver diseases with symptoms of jaundice, in which case it is necessary to conduct a general urine analysis.

Frequent attacks of urolithiasis with the appearance of blood in the urine requires specific therapy, examination and the use of a therapeutic diet. At home, when frequent urination and blood in the urine appear, the cat should be given a sedative and analgesic, assess the volume of urine and take the animal to the clinic.

WHAT TO DO IF A CAT IS BLEEDING
External bleeding is accompanied by the formation of dark-colored clots and crusts, depending on the source of bleeding: on the coat, skin, near the eyes, nose, mouth, on the auricles, in the mammary glands, near the prepuce in cats and the genital loop and cats. First aid in case of suspected bleeding:

If signs of internal bleeding appear, especially in combination with trauma, pain syndrome, poor general condition, it is recommended that the cat drink sweet water, give painkillers and immediately take it to a veterinary clinic, while trying not to move the animal much. In the clinic, ultrasound, X-ray, general clinical blood analysis, coagulogram and more are performed to diagnose internal bleeding. If necessary, the doctor will place the pet in a cat hospital, prescribe injections and intravenous infusions. Internal bleeding is often accompanied by large blood loss and the development of anemia, in which case the cat is given a blood transfusion. The recovery period requires special care and proper feeding. During the recovery period, it is good to use a therapeutic diet with a high content of nutrients.

In any case, at the first signs of bleeding, it is better to show the animal to a veterinarian who will be able to determine the cause of bleeding, stop it, thereby preserving health, and sometimes saving the life of a domestic cat.